Home » Inspiration » Look we made a DIY Elsa dress

If you have children under the age of 13, chances are you’ve seen the Disney film Frozen that came out in the UK last Christmas. Littlelish watched it back in January with her bestie and 5 months later it is still mentioned on average about 5 times a day in our house. Whether it is singing the songs, watching the DVD or generally just disecting the plot, Frozen is the first film that has absolutely captivated Littlelish. I mean she loves watching movies but has never been the kind of child that watches the same movie twice in a row… until now.

She joins the many 5 year olds of the world who can sing the entire soundtrack word for word. Heck she can even remember the exact actions and words at any given point of the film and goodness forbid you should get them wrong while reenacting ‘Do you wanna build a snowman?’ Yes, we have serious Frozen mania in our house and it doesn’t look like it is waning any time soon.

This Sunday saw the event of the year for Littlelish as her bestie turned 5 and threw a Frozen birthday party! It was mummy’s job to create the fancy dress outfit and seen as Littlelish was adamant that she wanted to go as Elsa and the official Elsa dress from Disney sold out months ago, it was time to get creative.

A sudden wave of panic hit me as I remembered this on Friday, rushing to the shops to stock up on all things blue and sparkly. I quickly selected some lovely blue dress silk, a greenish coloured net for the bodice and some sheer organza (of sorts) for Elsa’s magical cape. I also stocked up on glittery snowflakes, assorted blue and silver gems and some silver fabric paint.

Now all this sounds like a had a clue what I was doing, like I’ve made plenty of dresses in my time. But I haven’t and I kind of winged it so I can’t even share the official design with you! I will try and talk you through what I did for any of those brave / mad enough to want to make one.

First things first I took one of Littlelish’s simple A line dresses and drew around it on the fabric, remembering to make it a couple of centimetres larger than the actually dress to give the seams and hem some room to be sewn. The dress wasn’t long enough for the Elsa dress so I extended the bottom line out to make a longer dress.

So finally I had a shape, I chopped off the top strap part to make it a boob tube style dress as Elsa’s dress has a sheer top and sleeves. It also has a greenish type bodice so I took the green net I had bought, cut out a bodice shape and used the sewing machine to attach it to the sides of the dress shape. I then took the dress shape and drew around this again to make a back part to attach to the front. A quick go on the sewing machine and I had a basic dress with a green net bodice at the front. So that part was easy…. then came the floaty train which was causing me to worry! I cut out a large piece of the floaty fabric, twice as long as the dress and twice as wide and hand sewed it to the top of the dress.

I was pleased as it started to resemble something but the dress also needed to stay up and be sturdy enough for a childs party, eeek! After much deliberating I decided the seethrough arms were too much of a faff so I bought a teeny crop top for 5 year olds (!) and hand sewed it into the top part of the dress. We had straps! Littlelish tried it on, it fit, it stayed up and it was comfortable! Woooooo.

I then decided to ‘decorate the dress’ ( by attaching a line of blue sequins to the top of the bodice and a line of white sequins to the side of the train. I knew I wouldn’t get away with a plain train (no mummy, Elsa’s train has snowflakes on it!) so I hand painted a few snowflake patterns (thanks google) with silver fabric paint. We stuck a few gems on with my glue gun and hey presto we had a DIY Elsa dress and all for less than 1o pounds.

One french plait later with some pretty snowflake decorations and we had a real life Elsa walking round. Littlelish was literally OVER. THE. MOON which made all the hard work worth it. It felt so good to see that beaming smile, she felt so proud.

So far Elsa’s dress has also been worn by several of her little friends this week  and it has even survived the playdates which I am pretty chuffed with. Let me know if any of you give it a go or have any questions, just pop me an email and I will try and help :)

2 Comments on Look we made a DIY Elsa dress 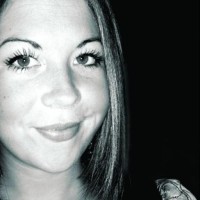